How professional learning can lead to better decision making 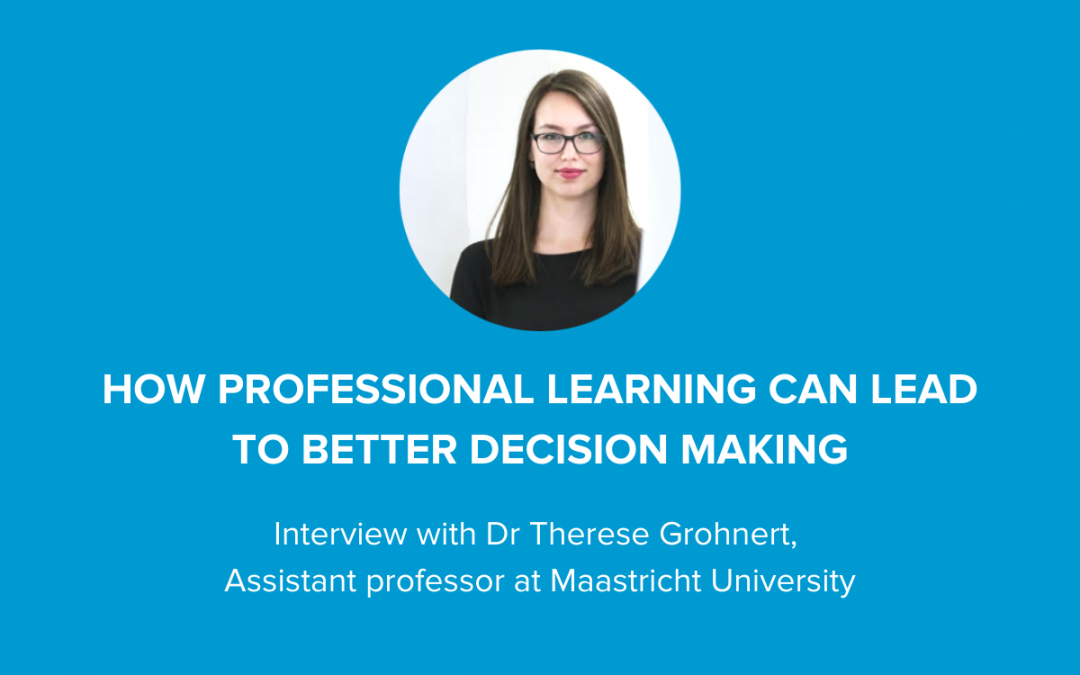 TalentMiles builds on partnerships with a cross-disciplinary and global community of researchers. One of them is Therese Grohnert, an expert in the field of professional learning and decision making. She’s part of the research team of professor Wim Gijselaers at Maastricht University School of Business and Economics in the Netherlands. In her latest study which she conducted together with Gijselaers and Roger Meuwissen, she looked at the link between professional learning and decision making and came to some surprising conclusions. ‘It’s not those at the top or the bottom who need to feel safe in order to share information, but rather those in the middle. They are the glue between the layers.’

At the basis of Grohnert’s research is a renowned book: Thinking Fast and Slow, by Daniel Kahneman. This book talks about two modes of thought: the fast, instinctive and emotional and the slower, deliberative and more rational. By switching between those styles when making a decision, you get pretty different results. Taking some time to sit back and reflect can really influence the outcome of a thought process.

Gijselaers, Grohnert and Meuwissen wondered whether or not this reflection process would also influence decision making within companies and so they decided to zoom in on the field of accountancy. It was a deliberate choice, as accountancy is known for its predictiveness at times, but also its impredictiveness at others. The researchers considered it the perfect place to look at the dynamics of professional learning and decision making.

Grohnert:”We started out with a meta-analysis. We looked at what was already known about this topic and found 50 studies looking at a total of 4000 teams. In those studies, we found four important criteria for fostering learning at the team level within an organisation: good working conditions, culture, the behaviour at the top and the facilities. Autonomy turned out to be very important, but also having a clear goal. That helps a team to learn on its own. And you should also permit teams to go and look for information wherever they want.”

For the accountants, the latter isn’t always that obvious as the accountancy world has clear layers. Grohnert: ”They mostly work in couples, where they only speak to the person right above or right below them. There aren’t that many moments where the whole team gets together, so they’re very dependent on their colleagues sharing information with the layers above them. If you’re at the top of a six layer team, five people have to decide to share certain information with you. If they don’t, it will never reach you.”

Grohnert continues: ”By interviewing accountants, we found that there are big differences between the teams when it comes to knowledge sharing. In teams that do have a learning culture, the younger accountants are taken into account by the higher ranks of the team. They do participate in meetings where they might not understand everything, but at least they feel included. The behaviour of direct reports is very important in order to create such a learning culture. That made us wonder where these differences come from.”

The final part of the research consisted of a series of simulations, where teams of accountants were put together in order to make decisions about the future of fictional companies. A total of 1200 accountants took part in that research. Grohnert: ”A team consisted of a partner, managers and younger seniors and associates. They all got different information, so they had to work together in order to figure out the whole puzzle. Sometimes the younger accountant could tell from the balance sheet that a company was actually going to make it, whereas the senior manager was doubting that based on the information he or she got. That way, the younger accountant would actually have to speak up.”

In order to look at the effect of reflection time on the decision made, half of the teams took a couple of minutes to reflect first. They checked whether or not certain people already had experience in complex decision making, but also talked about the expectations they had in terms of behaviour, in order to be able to get to the right decision. Grohnert: ”Some of the teams decided to take turns, so everyone would be able to share. Others worked in couples, to make sure that all input was included.”

What Gijselaers, Grohnert and Meuwissen found in the teams that didn’t take a moment to reflect was that hierarchy did have an effect on the amount of information that was shared. ”The higher you are in the hierarchy, the more you share. Younger people really held back. Not because they didn’t dare to share, but because they felt that they wouldn’t be able to make a valuable contribution.”

They also found that for those teams, psychological safety can help people share more, especially those in the middle: ”It didn’t make a big difference for the younger accountants or the partners whether or not they had a sense of psychological safety, but for the middle managers it actually did. They did share way more than in teams that didn’t feel safe. If those in the middle feel safe to share, it will help the whole team. They are the glue between the layers.”

Teams that did take a moment to reflect, saw everyone sharing the same amount of information, regardless of their position within the company. Grohnert: ”Those teams indicated that the information they shared was really taken into account. They didn’t feel ignored or passed by, which was the same for everyone. They also mentioned that they felt safer, because partners held back a bit more, giving space to the younger accountants. That reflection time means a lot to the younger accountants.”

What this research shows according to Grohnert is the importance of modeling the right behaviour at the top. Grohnert: ”As a leader, you can tell about your expectations, but it’s far more important to give the right example. Instead of saying: ‘We’re a learning organisation’, it’s better to put that into practice. Otherwise people will know straight away that you weren’t actually serious about that and they will never follow.

For companies, this means creating a culture where reflection is part of the day-to-day business, without it becoming a checklist. ”You have to keep people engaged, having them take it seriously whenever you do reflect. Otherwise it will become very hard to keep on doing that. You have to be consistent in order to create a culture that favours learning. And you have to be very honest about your own mistakes, because otherwise other people will never share theirs with you. If employees see a leader talking about his or her mistakes, see a colleague who does make a mistake not being punished or see colleagues not changing their opinion of you because of a mistake, that’s what creates a culture where information will be openly shared.”

The importance of company culture will be the next step in the research: ”We started off with the individual and are now in the team phase. After that, we’d like to focus on the whole organisation and its culture. How long does it take to change a culture? What obstacles do you encounter when trying to change that culture? What works and what doesn’t? And why? We’ll use data to discover the obstacles for creating a learning culture. Those data can help to uncover the needs of individual workers to learn in their work. Because after all, you’re in the learning process together.”